This page looks at medal records which are available for soldiers who served in the British Army during the Second World War. The medal records discussed are for the Defence Medal, War Medal 1939-45, campaign stars etc. rather than decorations or gallantry medals like the Order of the British Empire, Military Medal or Military Cross. As you’ll need to order a service record to find out the exact medal entitlement of a soldier, I have written a guide to help you:

There are no readily accessible British Army medal records for the Second World War as defined in the opening paragraph. Unless you happen to have documentation to hand which records a soldier’s medal entitlement, the only way to currently confirm what medals they qualified for is to order their service record. If a soldier claimed their medals, then there will be a CS 20 Application for Issue of Campaign Stars and Medals which I discuss below but these aren’t currently accessible.

Below are two examples of the medal entitlement which were recorded on a soldier’s Military History Sheet. When you apply for a service record you can never tell what documents you will receive but I have found that they nearly always include this page. The extract is from the service record of my great-grandfather who served in the Royal Artillery and survived the war. His medal entitlement was the 1939-45 Star, Africa Star with Eighth Army Clasp, Defence Medal and War Medal 1939-45. Medals had to be claimed by the recipient and were issued unnamed. Below you can see the rectangular stamp which you should find somewhere on a soldier’s service record if their medals were issued. Often the stamp contains the abbreviation A.M.O. for Army Medal Office.

Below is another example of how medals are recorded in a service file. This was the medal entitlement of my great-great-uncle who died of disease while serving with the Royal Engineers in 1944. The clerk who originally wrote the medal entitlement made an error by recording the Defence Medal when my relative died shortly before he qualified for the medal. The medals were issued to his widow in June 1948.

Another place in the service record you frequently come across a part of a soldier’s medal entitlement is in their Army Form B.103 Service and Casualty Form. This is the most important document for researching a soldier and they have usually survived. You will typically find that if a soldier was awarded the Africa Star or qualified for the 1939-45 Star (initially known as the 1939-43 Star) early in the war, this will be written on the form. Occasionally, a soldier’s entire medal entitlement was recorded. Below is part of my great-grandfather’s Army Form B.103 which recorded that he was awarded the Africa Star with Eighth Army Clasp. His unit, the 125th Battery of the 38th Light Anti-aircraft Regiment was recorded on the left, he was in the Middle East (ME) at the time and his rank was Gunner (Gnr).

CS 20 Application for Issue of Campaign Stars and Medals

If a soldier applied for their Second World War medals then there should be a CS 20 Application for Issue of Campaign Stars and Medals held by the Ministry of Defence Medal Office. There are over 1.5 million of these cards which a soldier filled out when they claimed their medals. They include a name, address, army number, class and date of release and may contain additional information regarding the last unit a soldier served with and their rank. The cards are still used to check medal claims sent in by veterans and their next of kin but haven’t been released. However, not everyone who was entitled to medals claimed them, as a Daily Mirror column on 29 June 1949 reported:

Nearly four million unclaimed war medals are giving the War Office a headache. They are the surplus of nine million campaign stars, war service and defence medals ordered by the Army in the first days of peace – at a cost of some £309,286 6s. 8d. A Campaign Star costs the Government 8d. – a medal 10d. Today they lie in warehouses and underground stores, neatly packed in boxes which once housed 25-pounder shells…

The only use of the cards I can see is if you’re trying to track down the service record of a soldier who you know applied for their medals. I often get emails from relatives who have applied to the Ministry of Defence and provided their relative’s exact date of birth. However, their relative provided a false date and they don’t know their army number. As you need either an army number or exact date of birth to order a file you hit a brick wall unless they have an uncommon name. A CS 20 card would provide both an army number and an address to confirm you’re looking at the correct soldier. However, as they haven’t been released I expect it may be difficult if not impossible to get the Ministry of Defence to provide you with the information due to data protection.

British Army Medal Records Prior to the Second World War 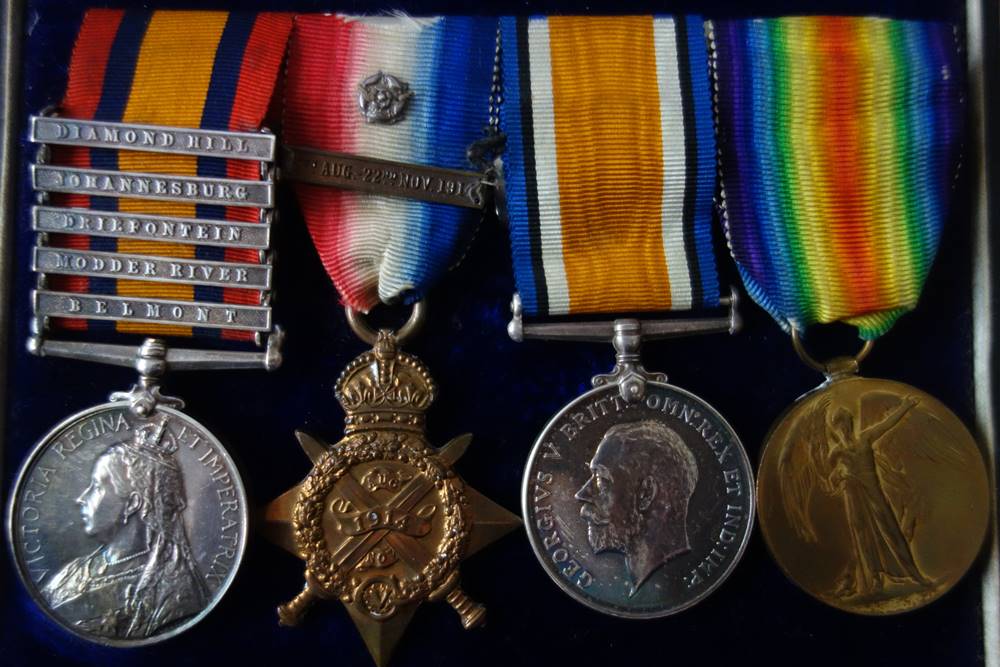 The medals above are to John West who served in the Grenadier Guards during the South African War (Boer War 1899 – 1902) and First World War. Wounded at Diamond Hill in the former and taken prisoner in 1914 during the latter, John provides a good example of the type of medal records available for soldiers prior to the Second World War. In total there are four documents: