During the Second World War, each British Army officer had a unique personal number and each soldier serving in the ranks a unique army number. This page looks at why the numbers are so important and how they can help you to research those who served in the British Army. The article is divided into the following sections:

I have written a separate article on how to find an army number and offer a Second World War soldier research service.

What was an Army Number or Personal Number?

Army and personal numbers were brought in following the First World War to help simplify army administration. During the First World War, British Army officers didn’t have a number and other ranks had a regimental number. Though officers did have a long number which covered their service file and correspondence this number doesn’t appear on their medal records, London Gazette entries etc. Regimental numbers were not unique and each corps or regiment numbered its own other ranks. If a soldier was transferred between regiments or corps they received a new regimental number. In addition, there were often multiple men with the same regimental number in each regiment or corps.

To simplify the system, after the war, the British Army allotted each officer a personal number and each soldier who served in the ranks an army number which was unique to them. In addition, a soldier would not receive a new number if they were transferred to a different regiment or corps, as they now kept the same number throughout their service. Army Order 388 of 1920 led to the “substitution of regimental numbers for army numbers” and I have transcribed the passage below. The process took many months to complete and the latest example of a substitution of a regimental number for an army number I have found is May 1921.

Below is a page from Martin Thomas’ Army Book 64 Soldier’s Service and Pay Book, a document which has often survived within families. Thomas’ army number was 1542685 from the block allocated to the Royal Artillery and he enlisted at Belfast on 21 October 1939. While Thomas’ Army Book contains a lot of useful information, I would need to order his service record from the Ministry of Defence to research his service career in-depth. 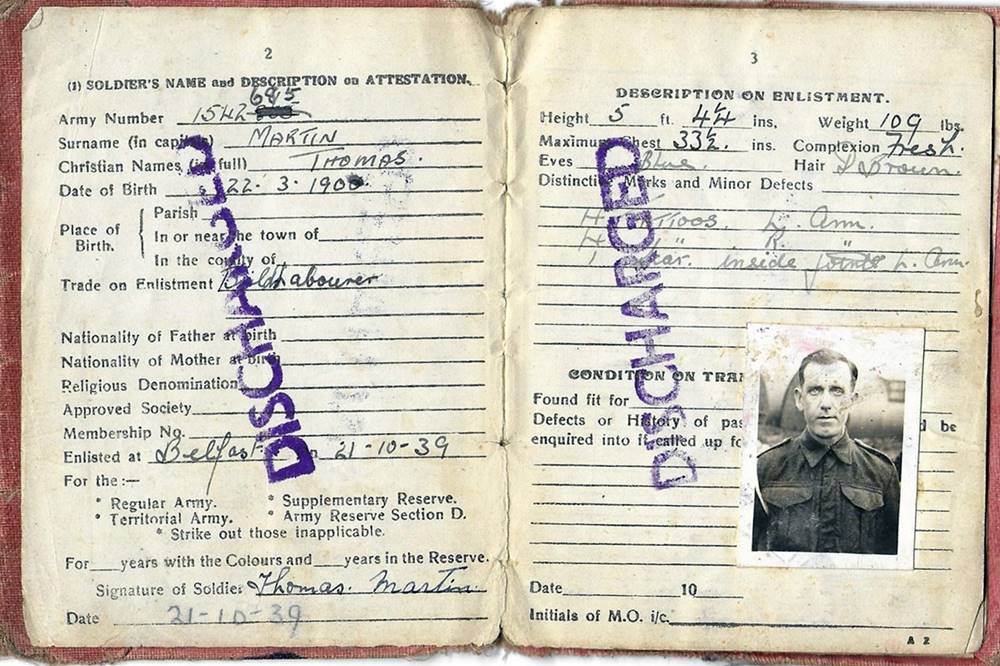 Why are Army and Personal Numbers so important?

Army and Personal Numbers are important as they allow you to begin your research into an officer or soldier’s service career and order their service record if you’re eligible. I have written a separate article on ordering a service record here: A Guide to Ordering a British Army Service Record. Unfortunately, there are few records available online and except for an officer, a search will often yield no results. Follow the steps below to start your research:

To research either an officer or other rank who served during the war, you really need to get hold of their service record. Clicking on the banner below will take you to FindmyPast which is the only website I recommend for Second World War British Army documents.

Substitution of Army Numbers for Regimental Numbers. 1. With reference to paragraph 1899, King’s Regulations, as amended by Army Order 453 of 1914, it has been decided to substitute a system of army numbers in place of regimental numbers.

2. With effect from the date of this Army Order, army numbers will be allotted on one continuous series, as under:

(a) To all soldiers serving in the Army and the Territorial Force on that date, with the exception of the Labour Corps.

(b) To all soldiers serving in the Army Reserve.

(c) To all recruits who may in future enlist into the Regular Army, the Militia, Special Reserve, and the Territorial Force.

(d) To all men who may re-enlist, who had not been previously allotted an army number.

(e) To all soldiers who may be transferred from the Royal Marines.

(f) To all deserters who may rejoin, and who have not already been allotted an army number.

3. Army numbers will be allotted by officers i/c records.

4. A soldier will retain the army number originally allotted to him throughout his service, irrespective of whether he may subsequently be posted within a corps or transferred to another corps. An ex-soldier who may re-enlist will resume the army number which he previously bore.

5. The London Regiment will be considered a corps for the purpose of this Army Order.

6. Appendix I to this Army Order contains particulars of the blocks of army numbers which are allotted to corps.

7. As the Royal Army Service Corps is divided into four main branches, the following prefixes to Army numbers will be used to denote the branches in which soldiers of that corps may be serving:

8. In order to carry out the numbering of serving personnel of the Regular Army, the following procedure will be adopted:

(a) With the exception of the corps enumerated in (b) officers i/c records will prepare nominal rolls (in the form prescribed in the Appendix II to this Army Order) of all soldiers serving with corps affiliated to their offices, and will allot thereon army numbers. Copies of the rolls will be forwarded by them to officers commanding regular units and regimental paymasters.

(b) In the case of undermentioned corps officers commanding regular units will, on receipt of this Army Order, render to officers 1/c records nominal rolls, in the form prescribed in the Appendix III to this Army Order, of all soldiers borne on the strength of their units (including detached men):

On receipt of these rolls officers i/c records will allot a number to men enumerated on the rolls and will forward completed copies to officers commanding regular units and regimental paymasters.

(c) Officers commanding regular units will publish in Part II Orders particulars of army numbers allotted. Such orders will show both regimental and army numbers. They will also enter the army numbers in duplicate attestations and all other documents relating to soldiers.

(d) Both the former regimental numbers and the new army numbers will be recorded in the pay and mess books and acquittance rolls rendered after army numbers have been allotted, as under:

(i) In the case of the corps mentioned in sub-paragraph (b) above for a period of two months.

(ii) In the case of all other corps for a period of one month.

9. Officers i/c records will allot army numbers to all soldiers who have already joined the new Territorial Force, and whose attestations they hold. They will forward nominal rolls showing the allotment of army numbers to officers commanding units and regimental paymasters. The former will publish the army numbers allotted in Part II Orders.

10. The renumbering of the Army Reserve will be effected as follows:

(b) Officers i/c records will recall the identity certificates of the men referred to in (a), delete therefrom the words “Regtl. Number” and the number already recorded, and insert instead the words “Army Number” and the new number allotted. In returning the amended certificate to the reservist, a slip will be attached directing his attention to the new army number allotted to him.

11. The necessary amendments to the Regulations will be published in due course. In all Regulations, Army Books, and Army Forms, pending revision, the term “Army Number” should be substituted for “Regimental Number.”