The Defence Medal was awarded to those who served in the British and Commonwealth armed forces as well as civilians who qualified during the Second World War. This article is divided into the following parts: 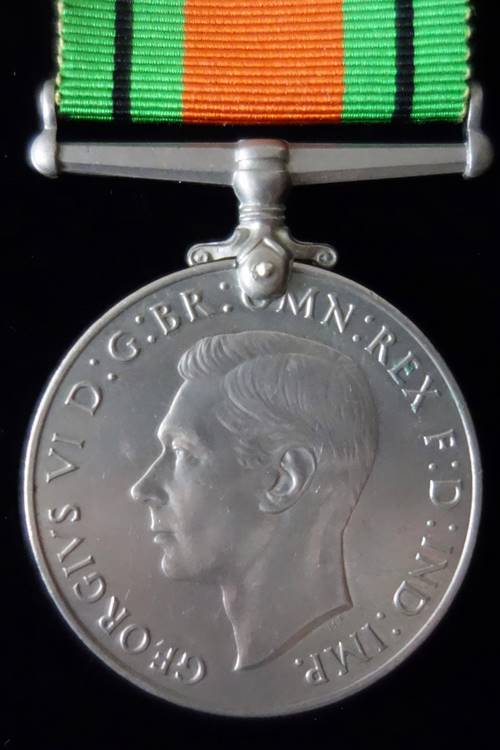 History of the Defence Medal

After the end of the First World War, there was a lot of controversy that no medal was awarded for service solely in Britain and Ireland. To be awarded a campaign medal, a soldier serving in the British Army had to leave Britain and Ireland and serve overseas. It was decided during the Second World War that there would be two medals soldiers could qualify for, even if they remained in Britain or Northern Ireland for the duration, the War Medal 1939/45 and the Defence Medal. The announcement of the creation of the Defence Medal along with six campaign stars was made by Buckingham Palace on 17 May 1945:

The King has been graciously pleased, in recognition of the great services of the Armed Forces and the Merchant Navy, to institute six new campaign stars – the Atlantic Star, the Air Crew Europe Star, the Italy Star, the France and Germany Star, the Pacific Star and the Burma Star.

His Majesty has also decided to create a Defence Medal for military non-operational service overseas from the country of residence, and for specified service in the United Kingdom and other territories which have been subjected to air attack or closely threatened.

How a Soldier Qualified for the Defence Medal

Like other Second World War medals, the award criteria for the Defence Medal is long but most soldiers qualified after service of either one or three years. Though, there are exceptions as those serving in mine and bomb disposal units qualified after only three months. The qualifying period was between 3 September 1939 and 2 September 1945, though the cut off date for those serving in the UK was 8 May 1945. The Committee on the Grant of Honours and Decorations and Medals published a small booklet outlining the qualification criteria in June 1946, from which the following is taken:

The time qualification will be three years for (a), (c) and (d) except for Mine and Bomb Disposal units of the Forces in (a), for which the period will be three months. For (b) the time qualification will be (i) one year, except for (ii) service in territories subjected to enemy air attack or closely threatened, for which the qualifying period will be six months. Specified islands in non-operational areas in the Pacific are included among these territories.

(b) It is the intention, for example, that service up to the 2nd September, 1945, by the United Kingdom Forces in West Africa, Palestine or India, as well as service by Dominion Forces, other than operational air crew, in non-operational areas outside their own countries, should also be a qualification.

Description of the Defence Medal

Obverse: Head of King George VI facing left surrounded by the legend: GEORGIVS VI D:G:BR:OMN:REX:F:D:IND:IMP. The designer’s initials HP can be seen below the King’s neck.

Reverse: Royal crown above an oak tree flanked by two lions. The year 1939 is on the left of the medal and the year 1945 on the right. Beneath the oak tree are waves and at the bottom of the medal are the words THE DEFENCE MEDAL. 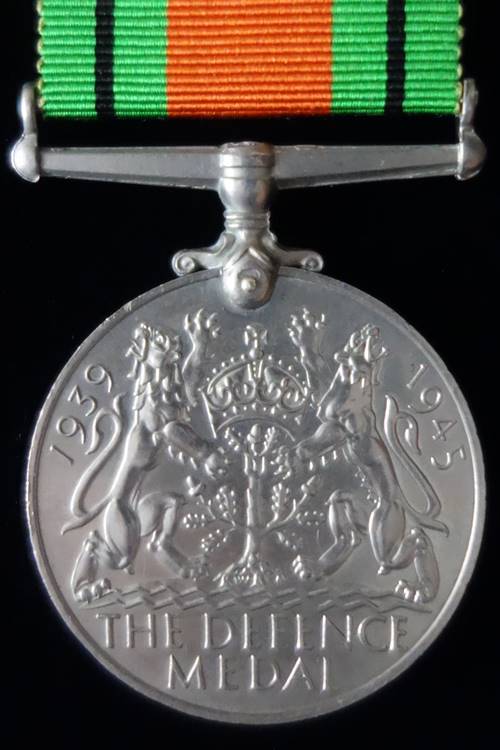 Metal: Cupro-nickel except for Canadian recipients who had the medal issued in silver.

Ribbon: The ribbon for the Defence Medal is very symbolic. The central orange stripe flanked by green stripes were chosen to be “symbolic of the enemy attacks on our green and pleasant land”. While the two black stripes represent the blackout.

Clasps: There were no clasps issued with this medal.

Designer: The obverse was designed by T. H. Paget and the reverse by H. Wilson Parker.

Are there any medal records for the Defence Medal?