The Africa Star was a campaign medal awarded to British and Commonwealth service personnel who qualified through service in the Second World War. This article is divided into the following parts: 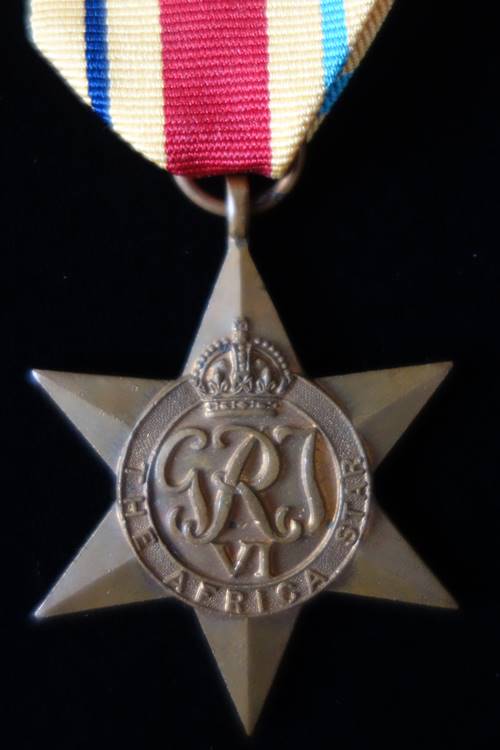 A History of the Africa Star

The Africa Star was the first of the Second World War campaign stars to be created and was instituted on 8 July 1943. The creation of the medal was announced the previous month in a speech by King George VI after the successful conclusion of the North African Campaign with the defeat of Axis forces in Tunisia. This is the victory which the King speaks about in his speech announcing the Africa Star:

This victory I have decided to commemorate by the issue in the near future of a star to be known as the Africa Star, while another, to be known as the 1939-43 Star, will be the reward of those in all my Services who have taken part in hard fighting in other theatres of war.

How did a Soldier Qualify for the Africa Star?

The Africa Star, like most Second World War campaign medals, has a complex award criteria in some cases but in essence, this medal was awarded for one day’s service in Africa between 10 June 1940 and 12 May 1943. A soldier usually qualified for the medal through service in North Africa between the Suez Canal, Egypt and the Straits of Gibraltar. Soldiers also qualified through service in Malta, Abyssinia (present-day Ethiopia), the Somalilands and Eritrea. If you would like to know the exact award criteria of this medal I would recommend looking at the New Zealand Defence Force website: Africa Star. There were three clasps which a soldier could qualify for which would be worn on the ribbon, also known as the riband, of the Africa Star. Only one clasp or emblem could be worn which was the first the person in question qualified for.

Description of the Africa Star

Obverse: Cypher of King George VI surmounted by a crown. Inside a circlet surrounding the cypher are the words THE AFRICA STAR.

Naming: The medal was not named for British service personnel.

Ribbon: The ribbon of the medal was symbolic. The dark blue stripe represents the Royal Navy and Merchant Navy, the red stripe the Army and the light blue the Royal Air Force. The buff colour represents the desert.

Are there any medal records for the Africa Star?

I have written a separate article explaining what medal records are available and how to confirm a soldier’s medal entitlement: What medal records are available for WW2 British Army Soldiers? If a soldier qualified for the Africa Star it should be recorded on a soldier’s service record. Below is part of my great-grandfather’s Casualty Form Army Form B.103 which recorded that he was awarded the medal with Eighth Army Clasp. His unit, the 125th Battery 38th Light Anti-Aircraft Regiment is recorded on the left, he was in the Middle East (ME) at the time and his rank was Gunner (Gnr).