My name is Robert Clark, and I offer a research service if you’d like to find out more about a soldier who served in the British Army during the Second World War. Many clients contact me after receiving a relative’s service record and being confronted with page after page of abbreviations and acronyms. I turn this jargon into a narrative history of the soldier’s service by combining the information found in their service record with war diaries and other documents held at the National Archives in London.

While many of my clients prefer a narrative history, I also provide a copying service if you are just after documents at the National Archives, British Library, or Imperial War Museum. See below for more details.

Below are the five stages of my comprehensive Second World War Soldier Research Service:

I can provide you with an accurate estimate if you already have a service record. You can contact me using the email address below:

I’m not taking on new research until 1 June 2022 due to a backlog caused by the pandemic.

I also offer a document copying service at the National Archives, British Library and Imperial War Museum. The documents I photograph most are war diaries, which are a record of a unit’s location and activities. After a service record, these are the most important documents for researching a soldier, as they will enable you to follow the person you’re researching throughout the war. Below is a single page from the war diary of the 3rd County of London Yeomanry (Sharpshooters), which at the time was trying to cross the Moro River in Italy. The war diary for the year 1943 contains over 125 pages packed full of information. Other popular documents I photograph include prisoner of war records, files of British officers who served in the Indian Army, battle reports, etc. I visit the National Archives weekly so you won’t have long to wait! 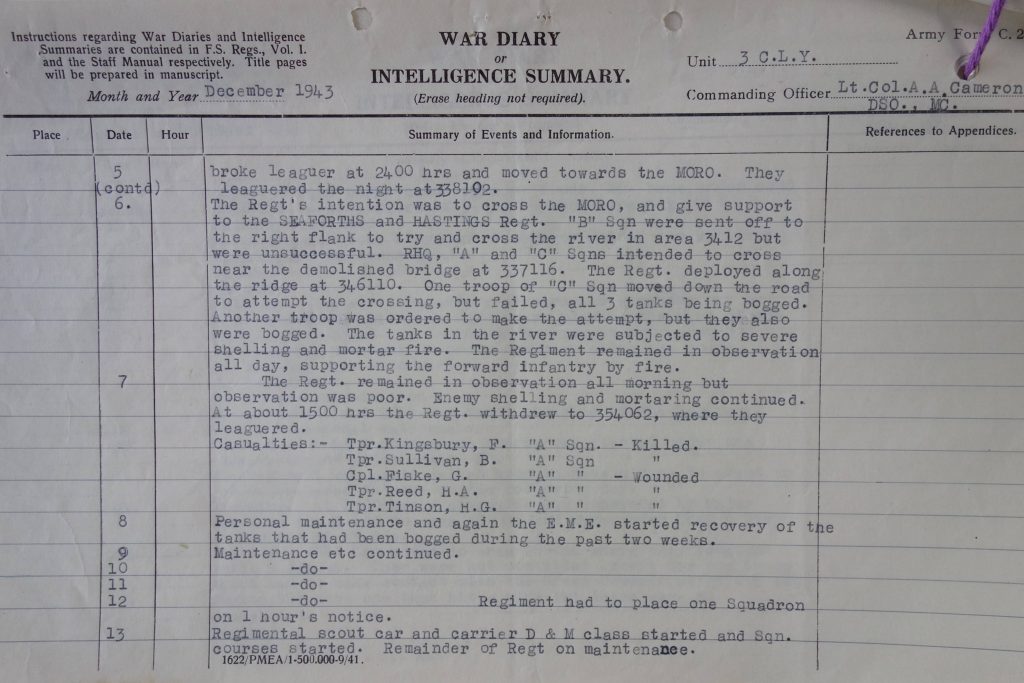