The Welsh Guards in the Second World War

When Britain declared war on Germany on 3 September 1939, the 1st Battalion Welsh Guards was stationed at Gibraltar. On 7 November, the Battalion left for Marseilles, France where the unit served as part of the General Headquarters Troops. For gallantry near Arras on 24 May 1940, Lieutenant the Honourable Christopher Furness was posthumously awarded the Victoria Cross. The Battalion was evacuated back to Britain from Dunkirk. Between 16 June 1940 and 12 September 1941, the Battalion served as part of the 24th Infantry Brigade (Guards). On 15 September, the Battalion joined the newly formed Guards Support Group and when it was disbanded, the 32nd Infantry Brigade (Guards) on 4 June. The 1st Battalion served with this Brigade until March 1945. Most of the Brigade’s service during this period was with the Guards Armoured Division.

Between 18 and 29 June, the 1st and 2nd Battalion Welsh Guards landed in Normandy piecemeal. The 2nd Battalion was also serving with the Guards Armoured Brigade as is armoured reconnaissance battalion. After the Normandy campaign, the 1st Battalion took part in the advance across France, into the Low Countries and Germany. The Commonwealth War Graves Commission (C.W.G.C.) recorded 251 dead for the Battalion between 3 September 1939 and 15 August 1945.

The 2nd Battalion was formed on 18 May 1939 and was stationed at the Tower of London when Britain declared war on Germany in September of the same year. Apart from a brief interlude at Theydon Bois, Epping Forest, Essex the Battalion remained at the Tower of London before it moved to Camberley in April 1940. At Camberley, the Battalion joined the 20th Independent Infantry Brigade (Guards) in which it served between 22 April 1940 – 13 September 1941. On 21 May, the Battalion moved to Dover where it embarked on board the SS Biarritz and the Mona’s Queen for Boulogne. Arriving at the port in the next morning, the Battalion took up defensive positions. The 2nd Battalion suffered heavy casualties, especially in prisoners, defending the port before being evacuated shortly before midnight on 23 May on board the destroyer Windsor.

There will usually be a lot of information available for a soldier who served in the Welsh Guards. The most important document to get hold of is their service record which is held by the Ministry of Defence. I’ve written a detailed article on how to order these documents: Order a Second World War Service Record. After a service record, you will need to get hold of the correct war diaries. These record the location and activities of a unit and will allow you to follow a soldier around the world once you find out when they served with that unit from their service record. These documents are held at the National Archives in London and I offer a copying service for them. I offer a copying service for these documents

The Welsh Guards used an army number block between 2,730,001 and 2,744,000 to number its soldiers who served in the ranks. Officers had a personal number, so the numbering block doesn’t apply to them. An army number outside the block means a soldier was transferred to the Welsh Guards from another regiment or corps. If a soldier of the Welsh Guards died between 3 September 1939 and 31 December 1947, then you can find when they died, where they are buried or commemorated and other information on the Commonwealth War Graves Commission’s website. The entry for Serjeant Idris Sullivan, who is buried in the North Sheen Cemetery recorded he was serving with the 1st Battalion Welsh Guards at the time of his death and that he was the “Son of James and Kathleen Sullivan; husband of Mary Sullivan, of Fulham”. His army number of 2734199 shows that Sullivan had joined the Welsh Guards on enlistment but his service record would be needed for further research. The 1st Battalion’s war diary makes no reference to Sullivan’s death but it is very poor for 1943. 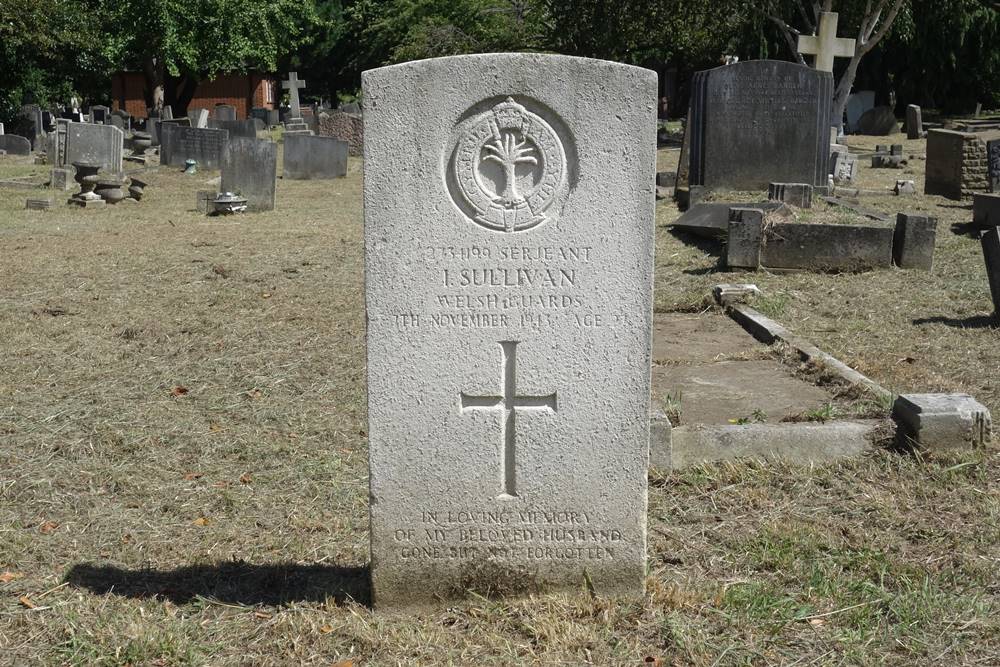 There aren’t many resources online for researching soldiers who served in the Second World War. Findmypast has the War Office casualty lists, a collection of documents relating to prisoners of war and the British Library’s digitized newspaper archives. The casualty lists are useful as they recorded British soldiers who died, were wounded, went missing, were taken prisoner and confirmed prisoner of war. In Idris Sullivan’s entry, he is shown as having “Died” which meant that he wasn’t killed in action and didn’t die from wounds. He probably died of disease or in an accident and more research would be needed to confirm the cause of death. Findmypast offers a free trial period.

I would also recommend purchasing a copy of the regimental history which has been reprinted by the Naval and Military Press. The reprint isn’t on the best quality paper so the photographs are very poor but the text is fine. You can often pick the first editions up for only an extra £5-8 more than the reprint, especially on Abebooks.

War Diaries of the Welsh Guards

After a service record, war diaries are the most important documents to find. They will record a unit’s location and activities and often contain appendices in the form of orders, battle reports and maps. They haven’t been digitized and can only be viewed at the National Archives. I offer a copying service for war diaries.

The following files held at the National Archives may be of interest if you’re researching either the Regiment or a soldier who served with it during the war.

The following three files are part of the WO 361 series of “Enquiries into Missing Personnel, 1939-45 War” held at the National Archives. These are important documents if you’re researching a soldier who was taken prisoner or reported missing during the war. They often contain eyewitness accounts regarding the circumstances in which a soldier went missing.