This article looks at the WO 361 series of enquiries into missing soldiers of the British Army during the Second World War. This is one of a series of articles I’ve written to help you in your research:

At the National Archives in London there are over 2,200 files relating to enquiries into soldiers of the British Army who went missing in the Second World War. Their catalogue reference is WO 361 with the WO standing for War Office and the full title is WO 361: War Office: Department of the Permanent Under Secretary of State: Casualties (L) Branch: Enquiries into Missing Personnel, 1939-45 War. They are very important documents to consult if you’re researching a soldier who went missing, was killed, or was taken prisoner during the war. If you want to find out whether a soldier was reported missing during the war, check the British Army’s casualty lists. The files often contain first-hand accounts of fighting, so they are also useful documents to consult if you’re researching a particular unit. The files usually relate to a specific theatre of war, prisoner of war camp, or the loss of a ship.

For example, the first file in the series, WO 361/1 is titled: Casualties at sea, Europe: SS Yorkshire. The Yorkshire was torpedoed and sunk on 17 October 1939 by U-37. There follows a series of files relating to ships being sunk, including the Gracie Fields, Maid of Kent, Crested Eagle, and the Lancastria. If you’re researching a soldier who was on board a ship, you will need to look at the ship’s file and their unit/regiment/corps’ file. For example, if you’re researching a soldier of the Auxiliary Military Pioneer Corps who died when the Lancastria sank, you’d need to look at the files covering the sinking of the ship and the file on soldiers of the Auxiliary Military Pioneer Corps who went missing serving with the British Expeditionary Force. There are also files relating to individual units. If you’re researching a soldier lost on board a ship, there may also be a relevant file in ADM 358: Admiralty: Casualty Branch: Enquiries into Missing Personnel, 1939-1945. These files may contain eyewitness accounts of a ship’s loss which can be used to add context.

A lot of the documents relate to those who died while prisoners of war of the Japanese and many files relate to deaths in specific camps. Statements regarding the conditions in the camps are often found in these files as well as accounts of Japanese war crimes. Other files relate to specific events, e.g. the bombing of the prisoner of war train at Aquila station on 8 December 1943 or the St Nazaire Raid. Most of the files in WO 361 will belong to one of the theatres of war listed below but there are also smaller numbers for Norway, Netherlands East Indies, etc.

There are also documents relating to “procedures to follow regarding presumption of death of personnel listed as missing”, “case against presumption of death of missing men” etc. However, most relate to the missing of a regiment/corps in a specific campaign, the sinking of a ship or a prisoner of war camp. There is often more than one file for a corps/regiment for Burma due to the length of the campaign.

What Information Do Enquiries into Missing Soldiers Contain?

The amount of information found in a file can vary considerably. In most cases, files will contain lists of soldiers who were reported missing. These lists will often provide the company, battery, squadron etc. a soldier was serving with when they went missing. Annotations regarding whether a soldier was confirmed killed, prisoner or was still missing often appear. Below is a typical example showing the missing of the 211th Battery of the 53rd Anti-Tank Regiment while it was serving as part of the British Expeditionary Force. The page was taken from WO 361/109 British Expeditionary Force, France: Royal Artillery; coastal defence and anti-aircraft, anti-tank and searchlight regiments; missing men. There will usually be multiple files for the Royal Artillery covering each campaign with each one concerning a type of unit. 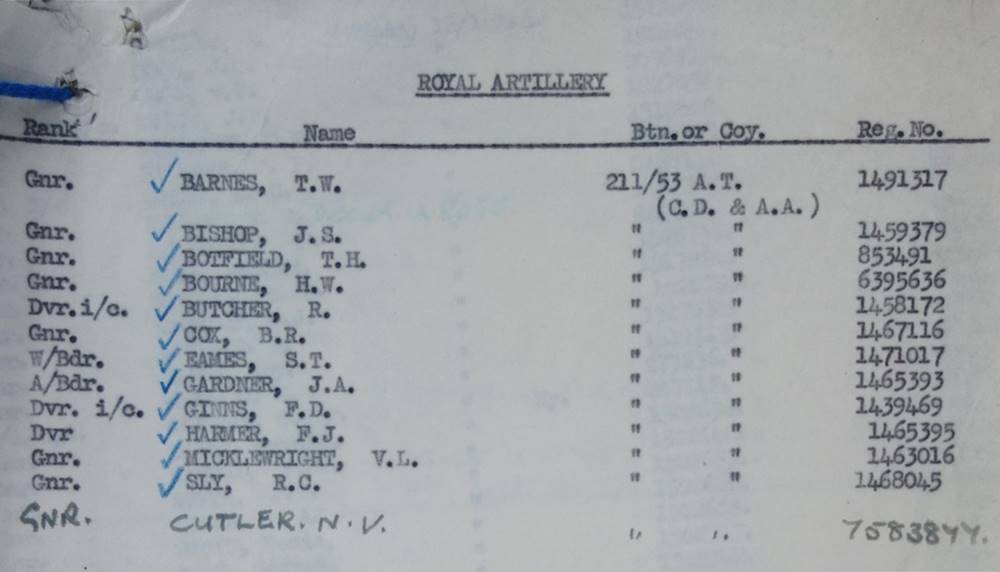 Below are three typical statements found in the files concerning missing soldiers. The first was made by Company Quartermaster-Sergeant Robinson of the 1st Battalion The Leicestershire Regiment around October 1943 and appears in WO 361/1011: Middle East: Crete; Leicestershire Regiment; missing personnel. Robinson was asked if he had any information regarding Privates 4856225 Albert Chamberlain, 6023668 Robert Francis, 6023701 Terence Howes, 6023774 Phillip Runagle and 4861713 Norman Wigley of C Company in which he was serving. While not providing too much information on the missing soldiers, Robinson provides an account of the circumstances in which they went missing. All five soldiers are commemorated on the Athens Memorial to those with no known grave.

On a date which would be approximately May 22nd [1941], C & B Companies were ordered to attack and destroy a radio station which had been captured by the enemy. Our positions were approx 1 1/2 miles southeast of Heraklion and the objective was about 4 miles southeast as the crow flies. The ground between was difficult, consisting of a series of ranges of hills and valleys which ran roughly at right angles to the line of advance, so that many of the men, who had already taken part in a week of heavy fighting were almost exhausted by the time the objective was sighted.

Just short of it, the two companies were subjected to heavy and sustained machine gun fire from concealed positions in front and on both sides. Many men were hit immediately, but the objective was destroyed, and the order to withdraw was given.

During the withdrawal, touch between platoons was often lost. Some wounded men were got back. The enemy eventually broke off the action and we arrived back in our original positions. A roll call was held immediately and the above named were reported missing. I can remember that someone reported that they had seen Privates Chamberlain and Francis hit, but no one knew what had happened to the others. I did not personally see any of these men hit.

The second was written by 775418 Lance-Corporal R. Barnes of No.4 Company 3rd Battalion The Welsh Guards on 15 July 1943. The statement appears in WO 361/925: North Africa: 3rd Battalion, Welch Guards; missing personnel. It concerned the circumstances in which 2737153 Guardsman Charles Sellick went missing. Sellick is commemorated on the Medjez-Bab Memorial to those with no known graves:

The following statement was provided by 3052911 Sergeant A Salter of the 2nd Battalion The Royal Scots regarding a Lance-Corporal of his unit who went missing during the fighting at Hong Kong in December 1941. Salter’s statement was summarised and probably written around January 1945. He provided information on five soldiers of the Battalion. I have kept the name of the soldier back who is commemorated on the Sai Wan Memorial to those with no known graves. The statement appears in WO 361/358: Hong Kong: The Royal Scots; missing personnel:

(iv) Remarks: – was one of first batch of militia to arrive in Hong Kong. Was with Sergeant Salter’s section during fighting at Shing Mun Redoubt. Was killed by dum-dum bullet in chest. Was seen to fall by Sergeant Salter and was examined by Sergeant-Major Milne who told Salter that he was dead and that, although there was only a small hole in his chest, there was a big hole in his back. D Company was commanded by Captain Pinkerton, R. Scots (wounded at Wong Nei Cheong Gap) from commencement of action 8 December 41 until 16 December 41 and by Captain Miller R. Scots, from 16 Dec 41 until 25 Dec 41 when action ceased.

As well as statements from eyewitnesses, the files often contain brief reports recording the circumstances in which a missing soldier was last seen. WO 361/107: British Expeditionary Force, France: Royal Corps of Signals; missing men. Of the five Signallers, four are commemorated on the Dunkirk Memorial to those with no known graves and Signaller Thomas Batchelor is buried in Eu Communal Cemetery.

2339044 Signalman Hoey, Richard Basil Echlin Hoey. 3rd Anti-Aircraft Brigade Signals. Missing 4.6.40. Presumed K.I.A. on 27.5.40. Cat. C. Last seen in vicinity of Hazebrouck when he took up a position on a Bren Gun the man who was with him has since been reported as buried at Hazebrouck. 5720

2583919 Signalman Cathcart, Robert 56th Medium Regiment Signal Section. Missing believed killed at Moorselle 25/5/40. Last seen leading a convoy on a motorcycle into the village of Moorselle – the convoy was ambushed.

2319911 Signalman Walker, John William 1st Divisional Signals. Missing 10.5.40 – 4.6.40. Unit report states he was left in a French military hospital near Bray Dunes on 1.6.40. He was injured in the leg but not thought serious enough to cause death. Awaiting further statement from officer commanding.

2590701 Signalman Batchelor, Thomas Percy. 46th Division. Missing 13.5.40. Last seen attached to Duke of Wellington’s Infantry Brigade. Reported to have gone with an officer to the village of Eu near Le Treport. Neither of them were seen again.

There are a number of additional sources of information which may add more detail regarding a soldier who went missing. The most important of which is the war diary of the unit they were serving with. A war diary was written by an officer and recorded a unit’s location and activities. When a unit was captured nearly complete, there won’t often be a war diary, e.g. units captured at Singapore or Tobruk. Two important sources of information for prisoners of war are WO 344: Liberated Prisoner of War Interrogation Questionnaires and WO 416: German Record cards of British and Commonwealth Prisoners of War and some Civilian Internees. These documents haven’t been digitized and are only available to view at the National Archives. Another source of information are newspaper reports regarding missing soldiers. You’ll often find two reports, the first when they went missing and a second confirming their death, return or that they were a prisoner of war. The British Library has the best collection of newspapers and a small part of its archive has been digitized and can be viewed on Findmypast. The photographs below were published in the Evening Despatch 11 July 1940 under the heading “Soldiers Can you Help?” with a request for information on the missing men.