This article on general construction companies will help you to research both the units and those who served with them. I’ve also written other guides to help you research those who served in the British Army during the Second World War:

Urgent Call for 250 to Volunteer

The War Department has announced that it desires to recruit a number of general construction companies in the Royal Engineers, which are required for urgent engineering works overseas, and the Borough Surveyor of Tynemouth (Mr D. M. O’Herlihy) has been asked to assist in the formation of a new company in Tynemouth borough area.

This company is to consist of officers and about 250 men of other ranks between the ages of 20 and 55 years recruited from blacksmiths, bricklayers, carpenters, joiners, masons, plumbers, painters, decorators, tinsmiths, concreters and drivers of concreting machines.

In addition, non-commissioned officers are required with some engineering and architectural knowledge, Application should be made to the Borough Surveyor of Tynemouth for particulars of rates of pay and conditions of service.

Of the 253 other ranks serving with the company, 230 were tradesmen, having passed a trade test in a particular skill. This will be recorded in a soldier’s service record along with their skill level in that trade. There were ten different trades, with Concreters of whom there were 64 and Pioneers of whom there were 118 making up the bulk of the tradesmen. There were also twenty-six non-tradesmen, all Drivers Internal Combustion (I.C.) who drove and maintained the unit’s vehicles. Though six of them acted as Batmen for the officers, one was on sanitary duties and another on water duties.

How to Research a General Construction Company

The most important document to research a general construction company is its war diary. This was written by an officer of a company and recorded its location and activities. They often contain appendices in the form of orders, descriptions of works carried out and maps. I offer a copying service for these documents held at the National Archives. Without a war diary, you won’t be able to research a general construction company and you’ll be lucky to find more than a brief reference or two to them online. General construction companies often served as general headquarters troops, on the lines of communications or under the command of a Commander Royal Engineers. They usually also have war diaries to consult which may contain more information on the company you’re researching. To find out if a general construction company was serving under a formation or on the lines of communication, you can turn to an order of battle or the unit’s war diary. Though, it wasn’t always recorded in every war diary. If the unit was serving abroad, then the information can usually be found on a field return of officers or other ranks. Below is an extract from the field return of other ranks of the 681st General Construction Company on 17 March 1940 showing it was serving with the II Corps Air Component.

The most important document to research a soldier during the war is their service record. This document contains a lot of information which isn’t recorded elsewhere and should provide you with a complete list of units a soldier served with. They are currently held by the Ministry of Defence and a £30 fee is charged for a copy. However, the Ministry of Defence is in the process of handing over service records of Second World War soldiers to the National Archives. Due to the millions of service records that need to be transferred and catalogued, this is a slow process. As of May 2022, the service records of soldiers who served in the Royal Engineers haven’t been added to the National Archives’ catalogue. I’ve written a separate article on ordering a service record.

If you’re researching a soldier who served in the ranks of the Royal Engineers during the war, then I’d recommend searching the Royal Engineers’ tracer cards which have been digitized by Findmypast. You can search the tracer cards by name, army number, or enlistment year. Initials were often recorded rather than full names. Even if you don’t know a soldier’s army number, you can often find a soldier from the information recorded on the tracer card. A card should provide you with a complete list of the units a soldier served with, along with the date they joined them. For example, a soldier who served in a general construction company would have the number of the company followed by G.C.C. on their card. These cards are full of military jargon, and I have a page listing the most common abbreviations and acronyms. There will be more information in a soldier’s service record than is found on their tracer card, so I’d recommend viewing both.

If you’re researching a soldier who was killed, wounded or captured while serving with a general construction company, you have a number of sources to consult, some of which are online. If a soldier died between 3 September 1939 and 31 December 1947 then their death will be recorded by the Commonwealth War Graves Commission. Their entry in the database will record where a soldier is buried or commemorated, along with the date of their death and other information such as their next of kin. Often, the exact unit a soldier was serving with will appear but it may just say Royal Engineers. You can also search the Royal Engineers’ Other Ranks Casualty Cards available on Findmypast. The cause of a soldier’s death can usually be found in these cards, and they may contain a detailed account, especially if a soldier wasn’t killed in action.  You can search by name or army number. The latter can be found in a soldier’s entry in the Commonwealth War Graves Commission’s database.

If you’re researching a soldier who was wounded or taken prisoner, you can search the casualty lists and prisoner of war records on Findmypast. Many soldiers serving with general construction companies were taken prisoner in France in May and June 1940. If a unit was recorded, then you can turn to its war diary to find out more. Findmypast also has the digitized British Newspaper Archive which is very useful to search if you’re looking for a casualty. Though, only a fraction of newspapers from the Second World War have been digitized. On 10 May 1940, Sapper Arthur Ernest Payton of the 697th General Construction Company was mortally injured in an air raid on the Bapaume-Grévillers Aerodrome. Eight soldiers of the Company were killed, two died of wounds and many more were wounded. Arthur’s Royal Engineers’ Other Ranks Casualty Card recorded he “Died 18:15 hours in No.3 Casualty Clearing Station France. Burns and gunshot wound leg”. In its 25 May 1940 edition, the Bath Weekly Chronicle and Herald published this photograph of Arthur, “who came through the last Great War with only slight wounds”. There are six paragraphs in the column containing a lot of information about his life, including the fact that he rejoined the army “against the wishes of his wife” after he lost his job as a builder. 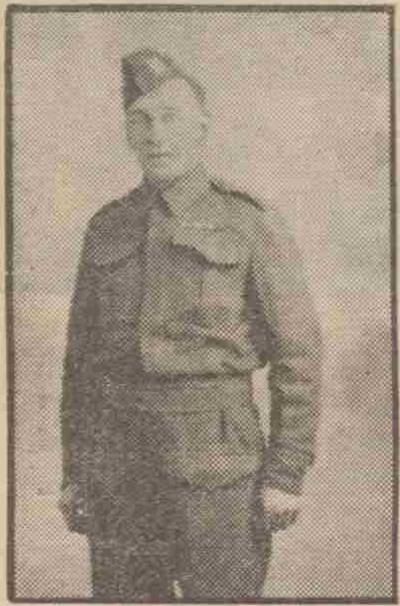 The National Archives has started to catalogue the WO 416 series of index cards created by the Germans for their prisoners of war. So far, surnames between Aaby and Scarcliffe have been catalogued. If you’re researching an officer, you can search for them in the London Gazette to find out when they were commissioned as well as any subsequent promotions, honours or awards. Depending on the reason an officer appears in the gazette, they may be recorded either by their full name or just initials.