This article will look at Second World War British Army Casualty Lists and is divided into the following four sections:

The daily British Army Casualty Lists 1939-1945 are a great resource to use if you are researching a soldier who served in the British Army during the Second World War. The lists contain casualty information for British Army officers, other ranks and nurses who were either killed, died, wounded, reported missing or became prisoners of war.

If the person was recorded as missing, then they should have another entry in a later list recording if they were later confirmed killed, not missing or a prisoner of war. I’ve created a list of British Army Second World War Abbreviations and Acronyms which will help you to understand the information contained in the lists. If you are using FindmyPast (see below) then the abbreviations and acronyms have already been written out in full.

The photograph below of Captain Hugh McCafferty was published in the Perthshire Advertiser on 10 July 1940 after he had been reported missing in France. Captain McCafferty makes three appearances in the casualty lists after he was captured at St Valery while serving with an unknown unit of Royal Army Service Corps on 12 June 1940. McCafferty first appears in Casualty List No.242 (Officers and Nurses) which contained all the “casualties reported to the War Office Casualty Section for the 24 hours ended 9 a.m., 27th June, 1940”. This recorded McCafferty as missing but erroneously reported him as serving with the Royal Artillery. He was reported as being a prisoner of war in Casualty List No.274 which recorded casualties on 6 August 1940. McCafferty’s final entry is in Casualty List No.1282 which reported that he had been repatriated. 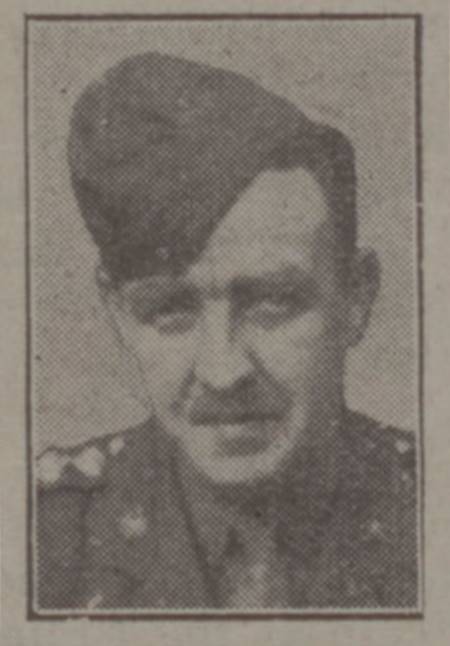 The original Second World War Casualty Lists are held at the National Archives in London and can be viewed there but you will need a Reader’s Ticket. The series is  WO 417 and in total there are 102 files. They run chronologically and are divided into files containing casualty information for officers and nurses and those containing information for other ranks. The WO 417 files have been digitized and are available to view on the subscription website FindmyPast which usually has a free 14 day trial period enabling you to search these records for free. If you click on the link below you will be taken to FindmyPast and these records can be found under the category “British Army Casualty Lists 1939-45”.

To search for a soldier on FindmyPast I would recommend just searching their surname and army or personal number (referred to as a service number on the site). If you don’t know their number then search their initials and surname. There are no first names on the casualty lists so if you are searching for a soldier with a common surname, you’ll need to know other information such as what unit they were serving in, where and the approximate date they became a casualty to find the correct soldier.

Casualty lists can be useful for finding an officer’s personal number or other ranks army number if you wish to order their service record from the Ministry of Defence. However, make sure you have the correct soldier. I would only recommend using a casualty list as your sole source of information regarding a soldier’s number if they have an unusual surname or you already have additional information e.g. you know the unit and date they became a casualty.

How British Casualty Lists can Help you Research a Soldier

The most important document to research a soldier during the war is their service record but not everyone wants to spend £30 and wait about six months for the Ministry of Defence to send a copy. In addition, if a soldier died within the last 25 years then you’ll need permission from the next of kin to order a copy which isn’t always obtainable. Providing you have a soldier’s number, you can quickly find out if they became a casualty. Once you have a date and their unit, you can then research what happened. There’s often information for infantry or armoured regiments online, especially if the soldier became a casualty in a famous battle, but you usually won’t have much luck if you want to research someone who served in a non-combatant unit e.g. Royal Army Service Corps, Pioneer Corps, Royal Electrical and Mechanical Engineers etc. The most important source of information for a casualty will be the war diary of the unit a soldier was serving with at the time. Detail will vary between war diaries but they are usually good for recording casualties and map references often appear.

A casualty list may also contain other men of the unit who were killed/wounded on that date your soldier was. Researching these men may hold the key to what occurred if the war diary provides no detail. Local newspapers often record casualties and describe what happened to them, with extracts of letters either written by the soldier or sent to their next of kin appearing. There are different approaches to take in gathering the initial information depending on whether the soldiers were wounded or killed. If soldiers of the unit died on the date your soldier became a casualty, search their army number on the Commonwealth War Graves Commission website. There is usually biographical information giving the name and location of the next of kin.

After you have a list of place names where the next of kin were living, search them on the British Library’s catalogue. On the left-hand side, under “Material Type” select newspapers. This will then give you a list of local newspapers to search. Some of these have been digitized but most will have to be ordered to the British Library. Those on microfilm can be ordered on the day but print copies take 48 hours to arrive. You will need a Reader’s Pass to access them. You probably won’t be able to find out next of kin information for those wounded, unless they have an unusual name in which case you can try to find them using the 1939 Register. However, if there are lots of wounded and they were serving with a Territorial Army unit, especially early in the war, check the local papers for its headquarters location. Territorial Army units recruited from specific areas pre-war and their casualties were often reported in the local papers. To find out whether a unit was part of the Territorial Army and where its headquarters was located, have a look at the May 1939 Army List on the National Library of Scotland’s website. Any soldier who has an army number starting with 14 initially joined the General Service Corps and they would have been very unlikely to have been sent to their local Territorial unit.