This article will help you to research soldiers who served in the Irish Guards during the Second World War. The first part provides a brief overview of the services of each battalion of the regiment. The second part looks at what documents are available to research the Regiment and how to order Irish Guards’ service records. This is one of a series of guides I’ve written to researching  soldiers who served in the British Army during the war:

The Irish Guards in the Second World War

On 1 March 1940, the Battalion joined the 24th Infantry Brigade (Guards) and served with this formation for the remainder of the war. The Battalion landed at Harstad, Norway on 15 April and after much fighting, landed at Greenock on 10 June. The 1st Battalion then remained training in Britain until 28 February 1943, when it boarded the Strathmore which sailed the next day for Algiers which was reached on 9 March. The Battalion disembarked during the night and soon headed east to take part in the Tunisian Campaign. Remaining in North Africa until 4 December 1943 when it embarked on board the Llangibby Castle which reached Taranto, Italy three days later. The Battalion served in the Italian Campaign for the remainder of the war. The photograph below is of Guardsman James Corbett of the 1st Battalion who was killed in action on 16 May 1940 in Norway. He is buried in Harstad Cemetery and this photograph was published in The Liverpool Echo on 23 July 1940. 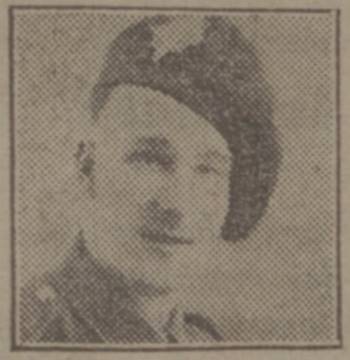 The 2nd Battalion first saw action in the Hook of Holland as part of a small infantry force sent to the Netherlands to help protect and evacuate the Dutch government. On 13 May, the Battalion landed with a solitary German plane dropping a bomb which exploded nearby as the unit disembarked. Orders had been received just prior to embarkation that the Battalion was to move towards the Hague. However, events on the ground meant that the Battalion remained at the Hook of Holland. Before long, Queen Wilhelmina had appeared and been evacuated. The Dutch government arrived later in the evening followed by the Diplomatic Corps. An air raid later in the day killed seven Guardsmen and wounded twenty-three. More casualties were sustained in an air raid the next morning before the Battalion was evacuated back to Britain on board the Malcolm, Whitshed and Vesper.

There was little respite, as on 22 May, orders were received to “Prepare to move”. This time, the Battalion was sent to Boulogne one of the important Channel ports in France to help in its defence. Embarking on board the Queen of the Channel, without most of its transport and with limited equipment and weapons, the Battalion landed at Boulogne in the evening. There was heavy fighting and many casualties were sustained before the Battalion was evacuated back to Britain, returning to Tweseldown Camp on the morning of 24 May. The Battalion then spent the next four years training in Britain. On 15 September 1941, the 20th Independent Infantry Brigade (Guards) was redesignated as the 5th Guards Armoured Brigade. The 2nd Battalion was converted to an armoured role and was designated as an armoured battalion. The 5th Guards Armoured Brigade served with the Guards Armoured Division for the duration of the war in Europe.

The 3rd Battalion Irish Guards was formed from the Regiment’s Holding Battalion at Northwood on 30 October 1941. On 5 September 1943, the Battalion joined the 32nd Infantry Brigade (Guards) of the Guards Armoured Division. It served with this Brigade until 21 February 1945 before rejoining it on 29 May 1945. On 23 June 1944, the Battalion landed at Arromanches, Normandy and served throughout the Normandy Campaign. The Battalion then took part in the fighting across the Low Countries and through Germany.

The most important document to research a soldier who served in the Irish Guards during the Second World War is their service record. This should show when they joined the Regiment and which battalions they served with and when. The service records are still held by the Ministry of Defence and I’ve written a detailed guide to help you find them: Order a Second World War Service Record. Service records will usually be between five and fourteen pages in length and contain information you won’t be able to find elsewhere. After a service record, the most important documents to view are the war diaries of the battalions the soldier served with. These will record its location and activities and I offer a copying service for these documents.

The Irish Guards was given the number block 2,714,001 to 2,730,000 to number its soldiers who served in the ranks. A soldier who served in the ranks who has an army number outside the above block served with another regiment or corps prior to joining the Irish Guards. Around April 1942, the numbering system changed when all soldiers were sent to the General Service Corps first. A General Service Corps number will begin with 14 followed by another six digits. I’ve written a guide on how to find army numbers but in most cases, you won’t be able to. Officers had a personal number instead of an army number and these weren’t allocated by regiment or corps. You can search an officer’s personal number on the London Gazette’s website to try and find the date they were commissioned and promoted. However, the search system is very poor and is unlikely to show all the information. An officer’s name will be recorded in full in some entries and with just initials in others.

There are a handful of documents which have been digitized and are available online which may be of use. The gallantry and honours awarded to soldiers of the regiment can be downloaded for a small fee from the National Archives’ website. I have set the search to “Irish Guards” and sorted chronologically. The Regiment’s dead between 3 September 1939 and 31 December 1947 can be found on the Commonwealth War Graves Commission’s website.  FindmyPast, a genealogy website which has a free trial, has some collections which may be of interest, especially if you’re researching a casualty. They have the War Office casualty lists, a selection of records relating to prisoners of war and the British Library’s digitized newspaper collection. The latter is useful if you’re searching for a soldier who became a casualty or was awarded a gallantry medal, or honour.

Regimental History of the Irish Guards

There is the excellent History of the Irish Guards in the Second World War by Major D. J. L. Fitzgerald, M.C. Published in 1949 by Gale and Polden and written by an officer who served with the Regiment during the war, this is the key book to get hold of. Over 600 pages packed full of information along with twenty-two maps. The maps are very detailed and will be a great use if you’re researching one of the major actions of the Regiment during the war. There are also thirty photographs and an index. You may have some difficulty in getting hold of a copy, as there hasn’t been a recent edition of the history.

War Diaries of the Irish Guards

War diaries were written by an officer of a unit and recorded its day to day activities and location. In addition to the daily entries, they often contain appendices in the form of maps, orders, battle reports etc. They are the most important documents to research a unit which served during the war. Clicking on the blue links below will take you to the war diary entries in the National Archives catalogue. War diaries haven’t been digitized and I offer a copying service for these documents.

These are important documents to view if you’re researching a soldier who went missing during the war or one of the battalions. This is due to the documents often containing eyewitness accounts of the circumstances a soldier went missing in. They are part of the WO 361 series of “Enquiries into Missing Personnel, 1939-45 War” held at the National Archives in London.