This article will help you to research soldiers who served in the Scots Guards during the Second World War. The first part of this guide provides a brief outline of the services of the different battalions of the Regiment during the war. The second focuses on what documents are available both to research a soldier and also the Regiment. This article is one of a series of guides I’ve written to researching soldiers who served in the British Army during the Second World War:

The Scots Guards in the Second World War

When Britain declared war on Germany on 3 September 1939, the 1st Battalion Scots Guards was stationed at Chelsea Barracks, London. On 1 March 1940, the Battalion joined the 24th Infantry Brigade (Guards) in which it served for the remainder of the war. The Battalion first saw active service in the disastrous Norwegian Campaign following Germany’s invasion on 9 April 1940. On 15 April, the Battalion landed at Harstad and served in the country until it was evacuated on 5 and 6 June, reaching Gourock, Scotland on 10th. The Battalion had a long period of training in Britain before it embarked for North Africa on board the Hired Transport Samaria at Gourock on 26 February 1943.

On the evening of 9 March, the Samaria docked at Algiers in Algeria, just in time for a short air raid. The Battalion then took part in the Tunisian Campaign which ended on 13 May 1943. The 1st Battalion remained in Tunisia until 4 December when the unit embarked on board the Llangibby Castle for Taranto, Italy. Three days later, the Battalion disembarked at Taranto and the unit served in the Italian campaign for the remainder of the war. The Commonwealth War Graves Commission recorded 368 dead for the 1st Battalion between 3 September 1939 and 15 August 1945. Of these men, 237 are buried or commemorated in Italy, 95 in Tunisia and 10 in Norway.

On 3 September 1939, the 2nd Battalion Scots Guards was stationed at Matruh in Western Egypt. The Battalion was part of the 29th Infantry Brigade which was redesignated as the 22nd Infantry Brigade on 3 October 1939. The Battalion served with the Brigade until 19 March 1940 when it joined the 18th Infantry Brigade. It served with this Brigade until 18 May 1940. On 10 June 1940, Italy declared war on Britain and the 2nd Battalion saw heavy fighting in the Western Desert Campaign in Libya and Egypt. The Battalion spent most of the period between 28 February 1941 and 14 June 1942 with the 22nd Guards Brigade, which on 14 January 1942 was redesignated as the 200th Guards Brigade. On 6 April 1942, the Brigade was reorganized as the 200th Guards Motor Brigade Group, then the 201st Guards Motor Brigade Group before being captured at Tobruk in June 1942. The photograph below shows Lance-Serjeant Robert Stewart of the 2nd Battalion Scots Guards who was killed in action on 27 December 1941. Robert is buried in Benghazi Cemetery, Libya with his epitaph reading “Goodnight Only Until the Day Dawns”. This photograph was published in The Courier and Advertiser on 17 February 1942 under the header “Fife Guardsman Killed”. 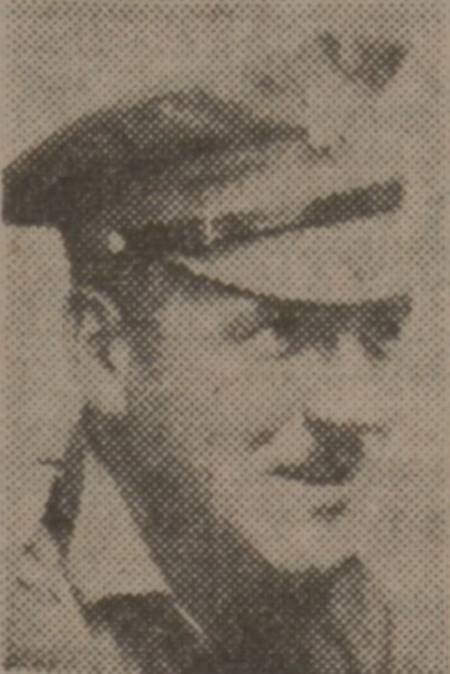 The Battalion also served briefly in Syria in 1942 before taking part in the Tunisian Campaign which came to an end on 13 May 1943. The Battalion had rejoined the reformed 201st Guards Motor Brigade on 25 August 1942 and served with the formation until 27 June 1943. The 2nd Battalion landed at Salerno, Italy on 9 September 1943 and served in Italy until the unit was withdrawn back to Britain in April 1944. The 2nd Battalion had left England in 1938 but instead of going on leave, the unit was quarantined for three weeks due to a case of smallpox. The Battalion remained training in Britain until 29 January, when the unit embarked for the Netherlands where it took part in the last months of the campaign in Europe. The Commonwealth War Graves Commission recorded 329 dead for the 2nd Battalion Scots Guards between 3 September 1939 and 15 August 1945. Of these men, 161 are buried or commemorated in Italy, 53 in Egypt, 28 in Tunisia and 26 in Germany.

The 3rd Battalion Scots Guards was raised in the Chigwell and Buckhurst Hill area of Essex on 16 October 1940 as a regular infantry battalion. The day after it was formed, the Battalion joined the 30th Independent Infantry Brigade (Guards). On 30 May 1941, the Battalion received the news that it was to be converted into an armoured unit. Hundreds of men left the 3rd Battalion following its conversion and joined the 4th Battalion. The 30th Brigade was redesignated as the 6th Armoured Brigade and on 15 January as the 6th Guards Tank Brigade before redesignated as the 6th Guards Brigade on 17 June 1945. The 3rd Armoured Battalion landed at Arromanches in Normandy on 21 July 1944 and served in France, Belgium, Netherlands and Germany.

On 28 September 1941, a Regimental Order announced the formation of a new battalion of the Scots Guards. Following the conversion of the 3rd Battalion Scots Guards into an armoured unit, 300 of its soldiers were posted to the 4th Battalion.  On 1 October, the Battalion joined the 32nd Infantry Brigade (Guards) in which it served until 5 September 1943. The Battalion was assembled at Wanstead, London on 11 October where the unit remained until 31 May 1942 when it moved to Marston Bigot Camp near Frome in Somerset. Here, the 4th Battalion remained until 2 October 1942 when it moved to Lynmouth and then to Longbridge Deverill later in the month. On 15 March 1943, the Battalion moved to Hunstanton in Norfolk. A field return on officers reported that the unit had a strength of thirty officers on 6 March 1943 while a field return of other ranks taken on the same date gave their strength as 723.

The 5th (Special Reserve) Battalion was a short-lived and very unusual unit of the British Army. It was formed in response to an Anglo-French plan to send a military expedition to Finland to help the country in its fight against the Soviet Union. The 5th Battalion was to be the British unit trained in the use of skis and winter warfare for the expedition. Volunteers were asked for from those who could already ski who were collected at Quebec Barracks at Bordon. Officers made a very large proportion of volunteers and 167 served in the ranks, resuming their commissions after the unit had been disbanded. The rest of the Battalion was a motley collection drawn from across the British Empire, the Regular and Territorial Army and civilian life.

The Battalion was initially organized into a headquarters and four ski companies. Another company, containing men from the Training Battalion at Pirbright who could not ski, was added to the unit later. The Battalion trained at Bordon and it wasn’t until the end of February 1940 that it received its Lee-Enfield rifles. On 2 March, the Battalion travelled to Southampton and landed in France the next day. The Battalion then travelled across France to Chamonix where it was billeted in hotels and began training, helped by the 199th Battalion of Chasseurs Alpins. On 11 March, the Battalion left Chamonix for Glasgow, where the unit arrived three days later. Here, news was received of an armistice between Finland and Soviet Russia. The Battalion was sent back to Bordon and disbanded shortly after.

The most important document to research a soldier who served in the war is their service record. This should show the units they served in and when, along with a wide variety of other information. The Scots Guards is unusual, in that their service records are still held by their regimental archive rather than by the Ministry of Defence. If you’re researching a soldier who enlisted up until 1938, you can view their service record on Findmypast. For a soldier who joined from 1939 onwards, you will have to make an application to the regimental archive. They currently charge a £30 fee unless you are the spouse or civil partner of the soldier. You can find the relevant details about ordering a file by clicking on the link below.

Order a Service Record from the Scots Guards’ Archive

If you want to learn more about a battalion of the Scots Guards, I’d recommend combining its war diaries with the regimental history The Scots Guards 1919-1955 by David Erskine. This is one of the best regimental histories to come out of the war and has been reprinted by the Naval and Military Press. The history covers all battalions of the regiment, not just those which served abroad and is divided into seven parts. The first covers the Scots Guards in between the wars and the last Malaya. The other five concern the Regiment’s service during the war and the aftermath. There are forty-four photographs but in the reprint these are very poor quality, and forty-five maps. There are six appendices including a roll of honour and a list of honours and awards. There is an index.

There aren’t a lot of resources online for researching those who served in the British Army during the Second World War. The Scots Guards used the numbering block 2,688,001 to 2,714,000 for its soldiers who served in the ranks. If you have an army number and it doesn’t fall within the above range, it shows that the soldier was transferred to the Scots Guards from another regiment or corps. Officers had personal numbers which used a different numbering system. FindmyPast, a genealogy site which offers a free trial period, has three collections which may be of interest. The first is the War Office Casualty Lists which recorded those killed, missing, died of disease/accidents, taken prisoner and confirmed prisoners of war. Then there are a variety of prisoner of war records and the British Library’s digitized newspaper archive.

War Diaries of the Scots Guards

A war diary was written by an officer of a unit and recorded its day to day activities and location. They often contain appendices in the form of orders, maps, battle reports etc. War diaries are held at the National Archives in London and can only be viewed on site. The blue links below will take you to the war diary’s entry in the National Archives’ catalogue. I offer a copying service for these documents.

The following documents may be of interest to you if you’re researching either the Regiment or a soldier who served with it during the war.

There are three files at the National Archives covering enquiries into officers and other ranks of the Scots Guards who went missing during the war. Most of these men were either killed or taken prisoner, while a handful managed to escape. The documents are very useful as they often contain accounts of the circumstances in which a soldier was last seen. Not only do these add important insights into a unit’s service during the war, if you’re lucky you may find that the soldier you’re researching provided an account.