A field company was a unit of the Royal Engineers which was usually found serving as part of an infantry division during the Second World War. Each infantry division contained three field companies, with each company often working closely with one of the three infantry brigades in a division. For example, on the outbreak of war, the 51st (Highland) Division contained the 236th, 237th, and 238th Field Companies. A field company’s equivalent in an armoured division was a field squadron. The role of a field company was to provide skilled engineering support in a wide range of tasks. These included the construction of defensive works, e.g. pillboxes, anti-tank obstacles, large shelters etc., demolitions, including road cratering and both the construction and destruction of bridges. Field companies were also used to support attacks, by clearing German defensive obstacles, booby traps and minefields. The photograph below shows two men of the 225th Field Company removing an unexploded shell in Italy in 1944. The Company suffered over a dozen casualties while clearing mines, bombs and demolition charges during the war. 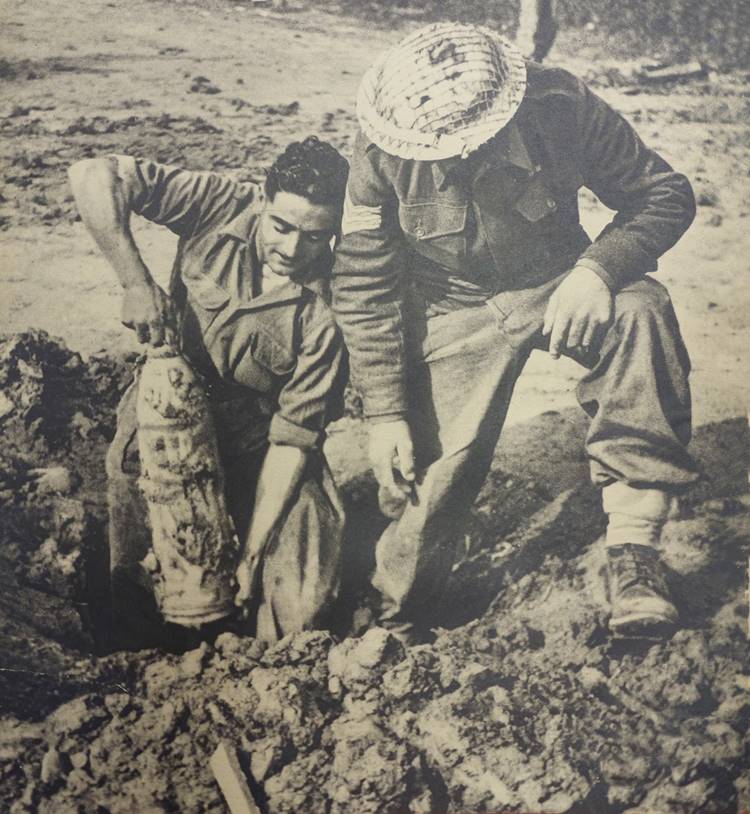 War Establishment and Structure of a Field Company

The British Army was constantly altering the war establishment and structure of its units and field companies were no exception. The war establishment and structure of a field company outlined below was published in February 1938 and was in use during the early years of the war. A field company consisted of a headquarters and “3 sections, each of 48 working men. Each section is self-contained for work and equipped with its own compressor and power tools”. The company was commanded by a Major, with a Captain as second-in-command, who both served with the headquarters. Each section was commanded by a subaltern, either a Lieutenant or Second Lieutenant giving a total of five officers for a field company.

Then there were 237 other ranks, with forty-five found in the headquarters and sixty-four in each section. Of the other ranks, 184 were tradesmen, having passed a trade test in a specific skill. They included thirty-two Carpenters and Joiners, fifteen Engine Artificers, seven Blacksmiths, seven Painters and Decorators, five Electricians, and four Plumbers and Pipe Fitters. A soldier’s trade, if they had one, will be recorded in their service record. There were also two Drivers from the Royal Army Service Corps. This Corps was responsible for the army’s supply and transport and its Drivers served in a wide variety of units. The non-tradesmen serving with a company included 46 Drivers Internal Combustion (I.C.). These men drove and maintained the field company’s vehicles and Driver I.C. will be recorded in their service records. Each officer had a Batman drawn from these Drivers who also provided the Officers’ Mess Servant and two soldiers for sanitary and water duties.

A field company’s transport consisted of a mix of thirty-five trucks and lorries, along with thirteen motorcycles and a bicycle. This was supplemented by two vans each driven by a Driver from the Royal Army Service Corps. Vehicles were in very short supply on the outbreak of war, especially for field companies of the Territorial Army, so the above figures should be taken as a guideline only. A unit’s war diary will often refer to a lack of vehicles if there was a shortage.

For weaponry, a field company was equipped with eighteen .38 Webley revolvers, 224 Lee-Enfield rifles, four anti-tank rifles (Rifle, Anti-Tank, .55in, Boys) and four light machine guns. Weapon shortages meant that some units had no anti-tank rifles on the outbreak of war and less than four light machine guns. Early in the war, most of the light machine guns with field companies were Lewis guns, developed in the First World War, rather than Bren guns which began to replace them. The role of a field company on the battlefield meant that it received limited weapons training, at least early in the war. A field company also carried gun cotton or plastic explosives. The official establishment was “Guncotton, slabs (in boxes of 14 lb.) or Explosive, plastic (packing not decided)”. Each section was to have 224 lbs (102 kgs) of whichever explosive was chosen giving a total of 672 lbs (306 kgs) for the unit.

Researching Soldiers who Served with a Field Company

The most important document to research a soldier during the war is their service record and the war diaries of the unit/s they served with. To find out which units a soldier served with you’ll have to turn to their service record which is held by the Ministry of Defence. I’ve written a detailed article for ordering these documents. Not a lot of documents have been digitized for Second World War soldiers but you can search the following online:

Once you know which unit/s a soldier served with, you can view the relevant war diary at the National Archives. A war diary will record a unit’s location and activities, so you can follow a soldier around the world and find out which campaigns they took part in and where they served. I offer a copying service for these documents. As most field companies spent the war as part of an infantry division, a further source of information will be the Commander Royal Engineers’ war diary of that division. This war diary will contain information on all the Royal Engineer units serving with the division and can be used to supplement the field company’s war diary. It can be difficult to work out which division a field company was with, though it will usually be recorded in its war diary. A good resource to find out which division a field company was serving with is Orders of Battle Second World War by Lieutenant-Colonel H. F. Joslen. If you wanted to get as much information as possible, you can also view the war diaries of the other two field companies in the division, as they often worked on similar tasks and in close proximity to each other.